Leave a comment Posted by Bob Goodnough on November 8, 2018 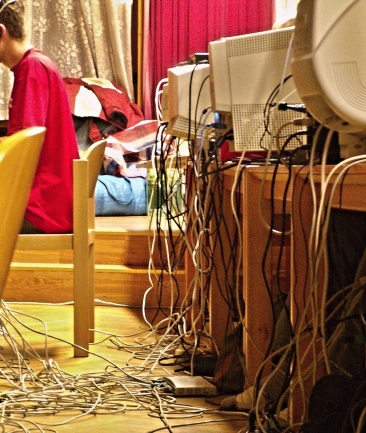 Getting our wires crossed

A few days ago, I reorganized our home office. When I turned my wife’s desk a quarter turn, all the wires that were hidden behind it were now a mess in the open air. Not as bad as the illustration above, but seriously unsightly and possibly dangerous.

I went about to put a little order into the confusion. I managed to eliminate one power bar and plug everything into the other. Now the monitor’s power cord was too short to lead it along the wall behind the computer. So I pulled a cord from the wall outlet and plugged it into the power bar, then plugged the monitor’s power cord into the wall outlet. Everything seemed fine now. But nothing worked. The printer, the computer, the monitor, the internet router were all dead.

I thought maybe by rearranging the cords I had inadvertently pressed the power bar switch. But nothing worked at either position of the switch. How could the power bar fail as fast as that?

Most cords were much longer than necessary for this setup and I was not sure which cord went to which device. I followed the cord plugged into the last socket of the power bar, it made a loop – and turned out to be the power cord of the power bar!

These power bars are a wonderful thing: several years ago the modem in a computer was fried during a thunderstorm and I don’t want to risk that happening again. But they have no power in themselves – they must be plugged into a source of power. Everything worked fine once the power bar was plugged into the wall outlet once again. And if the monitor cord is a little short, we will buy a longer one.

I, too, become powerless in Christian life if I am not connected to the source of power. I can not live as a Christian by my own power – I just do not have it in me. Jesus said, “I am the way, the truth and the life; no one comes to the Father except through me. The Apostle Paul’s desire was to “know Him, and the power of his resurrection.” So I need a living connection with the source of spiritual power – Jesus Christ – to live as a true Christian.