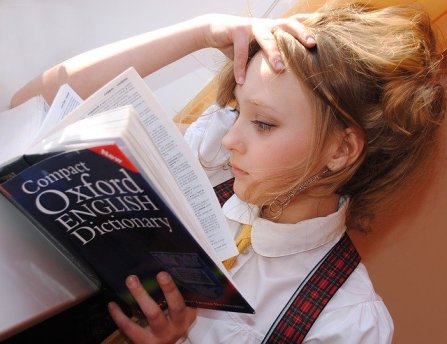 If we are a fluent reader we have a massive number of words stored in the occipital lobe of the left brain, which takes just 1/6 of a second to recognize each word and we read smoothly and effortlessly.

But that only happens if we have learned to read by recognizing the sound made by each letter. If we have learned to read by memorizing each word individually, our brain frantically searches the word pictures stored on the right side of the brain, then switches to the left side to decide what the word means. 20-25% of the oxygen used by the body is used by the brain, thus we soon become physically tired if we struggle to read like this.

It may sound contradictory to say that using memory storage on the left side is somehow different from using memory storage on the right side. The difference is in how that memory was stored in the first place. When we learn to read by phonics, we are teaching the parietal lobe in the brain how to recognize the word and what it means. After the parietal lobe has decoded a word a number of times it downloads that word to the occipital lobe for instant retrieval whenever needed.

When we learn to read by whole word recognition it is like having the pictorial part of the brain, on the right side, take a snapshot of the word. That takes far more memory and makes it more difficult to sort out all the pictures to recognize the one that matches the word on the page. Yet this is the method by which reading has been taught in the public schools for 75 years or more.

There was a time when most people in Canada and the USA were fluent readers; the literacy rate was at least 95%. That was back in the day when everyone knew that phonics was the only way to teach reading. The change in the method of teaching reading has been accompanied by an explosion of illiteracy and learning problems.

It is said that 40% of children will pick up the letter-sound correlation even if it is not being taught. Another 30% will eventually catch on. The remaining 30% will be labelled with some kind of learning disability. Many methods have been invented to help them learn to read, with only minimal success. Almost all of these individuals could learn to read if they were given direct instruction in phonics. That’s the way it was done years ago.

Children who have difficulty learning to read are often diagnosed as being dyslexic. A very small percentage of these children actually have the neurological condition that makes reading difficult. Even for those, the only workable solution is intensive instruction in phonics. Some children complain that the lines of type do not march straight across the page but wander up and down. Often the real problem is that their eyes are searching desperately here and there for some clue as to what this word means and the eyes lose track of where they started out. The solution to this problem is phonics, perhaps aided by a ruler or card to hold under a line of type.

There are programs in use that claim to use phonics, but don’t. Any program that uses flash cards or other visual aids is not based on phonics. Pure phonics focuses solely on the letters with no other visual distractions. Once the sounds are learned, a child learns how to blend the sounds together to make words. Every word needs to be sounded out, every time it is encountered, until the brain is able to instantly recognize it. Most children progress very quickly at this.

With proper instruction in phonics boys and girls learn to read at much the same rate. Without that instruction, girls learn much more quickly that boys. It seems that the female brain is more intuitive or flexible. What this means is that with our current method of instruction in the public schools most girls become fluent readers and at least half of the boys will struggle. The great majority of functionally illiterate people in the English-speaking world are men.

Some of the behaviour problems exhibited by boys in school may simply be due to the fact that they struggle to read and find it difficult to understand what is being taught. All subjects in school are dependent upon the ability to read. When a boy acts out the usual response is to implement some kind of discipline or behaviour modification. Maybe helping them learn to read would be more effective.

2 thoughts on “What happens in the brain when we read?”