Last Sunday Tiger Woods won the Masters golf tournament. An amazing triumph for a man who a few years ago thought his days of playing golf were over. Four surgeries and long months of rigorous training later, he is outplaying the best in the world.

He has had to endure pain, ridicule and scorn, and overcame them all. His reward? Another green jacket, a pile of money and tons of praise and publicity.

Those are things that will perish with time. The apostle Paul wrote about sports and said that Christians should train like athletes, not heeding the protests of their body. But, he said, they do it to win an earthly prize, we do it to win a heavenly prize.

The other big news story of this week is the fire that broke out Monday afternoon at the cathedral Notre Dame de Paris. President Macron cancelled a televised speech, politicians stopped campaigning. By noon the next day wealthy families in France had pledged 700 million Euros to rebuild the cathedral. That is more than one billion Canadian dollars. Obviously this 800 year old building has a great significance for a great many people.

But, the apostle Paul says: “God that made the world and all things therein, seeing that he is Lord of heaven and earth, dwelleth not in temples made with hands.”

What then should a Christian consider to be the most precious of all earthly objects? Not something to be worshipped, but the thing that is the most significant for Christian life? 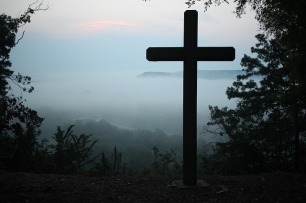 May we never trivialize the cross by calling the petty difficulties of life a cross. That is not the cross to which Christ directs us. The cross of Christ is an instrument of death. In order to become what God wants us to be, what he created us to be, everything that hinders must be nailed to the cross and left there to die.

That means all our human desires, hopes and ambitions must be taken out of the way. Just thinking of that brings agony and fear. Yet beyond the cross lies a new life, with blessings we cannot imagine and will never experience if we shrink from the cross.

Leenart Bouwens, an anabaptist preacher and colleague of Menno Simons and Theodore Philippe in the 15th century, baptized more than 10,000 persons. We don’t know a whole lot about him, but it is said that one time a couple came to him desiring to be baptized. After visiting with them he said “You need to go home and die first. I never baptize living people.”

The cross of Christ is still the way we must take to win the heavenly prize.