Many years ago this was all grassland, with water in all the low spots between the hills. There are a few larger bodies of water, the largest being Old Wives Lake, just north of the town of Mossbank. Wildlife is abundant in the hills; the lake is a migratory bird preserve. Buffalo no longer roam these hills; they are now partly cattle country, partly grain-growing country. 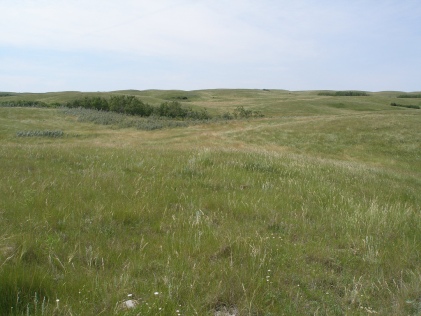 But for hundreds of years the Missouri Coteau was home to vast herds of buffalo and prime hunting ground for indigenous people. The Lakota people inhabited an area that extended from Old Wives Lake south into Montana. The Lakota medicine man Sitting Bull always claimed to have been born on the north side of the Medicine Line (the USA-Canada border). I don’t believe there is any reason to doubt the accuracy of his memory.

The Nakota people, closely related to the Lakota and speaking the same language, lived further east but also came to these hills to hunt buffalo. The Cree people who lived northeast along the Qu’Appelle Valley also hunted in this area. These people all respected each other and made no trouble for each other.

The Blackfoot people lived far to the west and did not come to these hills to hunt. However, sometimes a group of young braves ventured into the hill to seek an occasion to prove their manhood.

And so it happened on a day many years ago that a Cree hunting party had set up camp not far from the body of water now known as Old Wives Lake. The buffalo hunt was a family affair. The men killed the buffalo and brought them back to the camp. The women and children busied themselves scraping and drying the hides, collecting wild berries and pounding the meat and berries into pemmican.

Toward evening a scout returned to camp with the chilling report that a large group of Blackfoot braves was encamped in a nearby valley. Everyone knew that at the crack of dawn the Blackfoot’s braves would come galloping over the hill and slaughter everyone in the camp. The Blackfeet had done this many times before and their hidden presence left no doubt as to their intentions.

The men gathered around a campfire to plan a way of escape. There was a small chance they could drive off the Blackfeet, but many lives would be lost, especially of the women and children. To slip away during the night would silence the drums and let their campfires go out; that would send a signal to the Blackfeet to attack immediately. Their situation seemed hopeless.

Then the old women approached the men and said: “We have been talking. There is no hope for us all to get out of here alive. We will stay, keep the campfires burning, beat the drums and sing all night. You take the young women and children and slip away in the darkness. By morning you will be far from here and you will be safe.”

At first the men refused to consider this idea. But as they talked it became clear that this was the only way to save their young women and children. So they slipped away silently in the night, heading back toward the Qu’Appelle Valley.

The old women remained, kept the campfires burning, beat the drums and sang all night. In the morning the Blackfoot braves swept over the top of the hill, attacked the camp and killed the few old women who had stayed behind.

Soon the story was being told around campfires all through the west of how  mighty Blackfoot warriors had bravely attacked the camp of a Cree hunting party and killed a few aged women. The story reached the Blackfoot elders and they told the young braves “You have brought shame to our people, You shall not go into those hills again.”

From that time the lake and the small river that flows into it have been known as Notukeu (old woman) by the Cree. When French-speaking people came into the area and heard the story they translated the name to la Vieille. On English language maps the river is labelled Notukeu and the lake is Old Wives Lake.

The Bible tells us that God loves us the same way that these old women loved their children and grandchildren: “Can a woman forget her sucking child, that she should not have compassion on the son of her womb? yea, they may forget, yet will I not forget thee” (Isaiah 49:15).

In the New Testament, Jesus compares Himself to a mother hen: “ how often would I have gathered thy children together, even as a hen gathereth her chickens under her wings, and ye would not!” (Matthew 23:37).