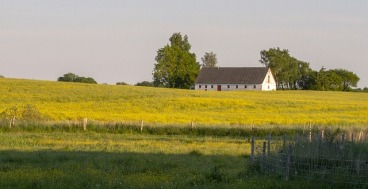 A few weeks ago farmers in our area seeded many fields with tiny, round, black Canola seeds. Before long green leaves appeared and grew large. Then flower spikes grew upwards and little yellow flowers appeared. Now we are seeing golden yellow fields like the one in the picture above.

That little black seed contained coding that enabled it to take nutrients and moisture from the soil and turn them into a plant many times larger than itself. Each flower will form a seed that is an exact copy of the seed from which the plant grew.

Is that a miracle? No; it is a predictable result of putting that seed in the ground. Do I  comprehend how the seed is able to do that? I can explain what happens, the why is beyond me. Only God could build a seed with life in itself and the ability to reproduce itself.

Have you ever thought about how much rain must fall from the sky to produce a crop? One centimetre of rain on one hectare of land amounts to 100 tonnes of water. Canola plants need 20 cm of rain between seeding and harvest to make a good crop. That is 2,000 tonnes of water per hectare. All that water is held in clouds in the sky and delivered to where it is needed.

Is that a miracle? No, it is simply another of the wonders of cration. Solomon described the cycle of water several thousand years ago: “All the rivers run into the sea; yet the sea is not full; unto the place from whence the rivers come, thither they return again” (Ecclesiastes 1:7).

Jesus fed thousands of people with just a few loaves of bread. I expect the loaves looked much like the ones in the picture above, as housewives in Israel weren’t using bread pans back then.

I expect that it was done so simply as to be almost imperceptable. Jesus broke a large piece off a loaf and gave it to one of the disciples. When he went to break off another pece to give to another disciple the loaf in his hand was about as big as before he tore anything from it. The disciples had the same experience. They kept breaking smaller pieces off the large piece in their hands and there was always more to break off. After everyone had eaten there was more bread left than there had been at the beginning. Now that was a miracle.

Jesus could have asked for a thousand loaves of bread to appear in the midst of the crowd. Think of the tumult as each one tried to grab some for himself. That was not His way. He blessed the bread and broke it to give to the people and it was clear to all that He was the giver. Most miracles occur quietly, almost unseen.

A few years ago Doctor Kevin Dautremont wrote in his blog of such a miracle. A young man had been a Christian, but became angry and bitter when he developed cancer and had to have one of his legs amputated. He turned away from God and from his family.

He was in palliative care and near the end when Doctor Kevin was called to see him. The young man’s voice had previously been almost inaudible, now he asked in a clear strong voice for help to stand. He stood on his remaining leg, looked at his mother, smiled and said “I’ve been with Jesus. And we were running.” Then he laid back on the bed, closed his eyes, and died.

Doctor Kevin asked: “Is there a greater miracle than a heart changed? A soul saved? A prodigal returned to the loving arms of His Father?”

You can read the full text of Doctor Kevin’s blog article here.