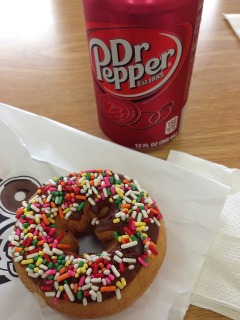 I read today in the online version of Le Point, a French newsmagazine, that yet another study has established a link between diet pop and increased belly fat along with an increased risk of developing type 2 diabetes. Apparently, pop with real sugar is better for your health.

I think I have discovered why I like Dr Pepper. They aren’t saying what 23 flavours are used to create its unique taste, but the consensus seems to be that amaretto is number one. Amaretto is derived from apricot pits, among other things, and has a taste somewhat like almond, yet different. My absolute favourite form of coffee is cappuccino with a shot of amaretto syrup, so I’m getting something akin to that in Dr Pepper.

Also in Le Point, I read that Robert Marchand just rode his bicycle around a velodrome for an hour, travelling a total of 22.5 km. Monsieur Marchand is 105 years old. When he was 81 he biked from Paris to Moscow.

I did 15 minutes on my rebounder today. I hope that counts for something.