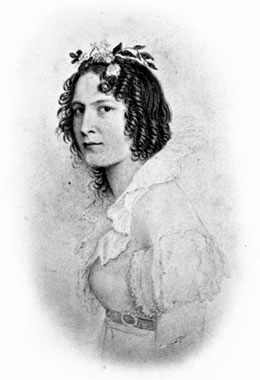 Sisters Susanna Moodie and Catherine Parr Traill were Canadian pioneers. Their husbands brought them from England to Canada in the early 1830’s, settling near Peterborough, Ontario where Samuel Strickland, a brother of Catherine and Susanna had earlier settled. The sisters had each written and published books before marrying and coming to Canada and both continued to write in what little time they could spare during the long hard days of raising their families and establishing new homes in the midst of the forest where practically everything had to be made at home. They wrote books for children and nature studies, but their most famous books describe their lives in the backwoods of Upper Canada (as Ontario was known at the time). Their most famous books are Roughing it in the Bush, by Susanna Moodie and The Backwoods of Canada, by Catherine Parr Traill. They were among the literary pioneers of Canada, helping to establish a literary tradition that realistically depicts life in a harsh climate.

The following excerpt is taken from Roughing it in the Bush and describes a time when Mr. Moodie had been called away for militia service after the rebellion of 1837. Jenny is their elderly Irish servant and nursemaid.

When the trees came into leaf, and the meadows were green and flushed with flowers, the poor children used to talk constantly of their father’s return; their innocent prattle made me very sad. Every evening we walked into the wood, along the path that he must come whenever he did return home, to meet him; and though it was a vain hope, and the walk was taken just to amuse the little ones, I used to be silly enough to feel deeply disappointed when we returned alone. Donald, who was a mere baby when his father left us, could just begin to put words together. “Who is papa?” “When will he come?” “Will he come by the road?” “Will he come in a canoe?” The little creature’s curiosity to see this unknown father was really amusing; and oh! how I longed to present the little fellow, with his rosy cheeks and curling hair, to his father.

June had commenced; the weather was very warm and Mr. T—– had sent for the loan of old Jenny to help him for a day with his potatoes. I had just prepared dinner when the old woman came shrieking like a mad thing down the clearing and waving her hands toward me. I could not imagine what had happened.

“Jist above in the wood. Goodness gracious! I have run to let you know — so fast —that my heart — is like to — break.”

Without stopping to comfort old Jenny, off started the children and myself, at the very top of our speed; but I soon found that I could not run — I was too much agitated. I got to the head of the bush, and sat down upon a  fallen tree. The children sprang forward like wild kids, all but Donald, who remained with his old nurse.  I covered my face with my hands; my heart, too, was beating audibly; and now that he was come, and was so near me, I could scarcely command strength to meet him. The  sound of happy young voices roused me up; the children were leading him along in triumph; and he was bending down to them, all smiles, but hot and tired with his long journey. It was almost worth our separation, that blissful meeting. In a few minutes he was at home, and the children upon his knees.  Katie stood silently holding his hand, but Addie and Dunbar had a thousand things to tell him. Donald was frightened at his military dress, but he peeped at him from behind my gown, until I caught and placed him in his father’s arms.

His leave of absence only extended to a fortnight. It had taken him three days to come all the way from Lake Erie, where his regiment was stationed, at Point Abino; and the same time would be consumed in his return. He could only remain with us eight days. How soon they fled away! How bitter was the thought of parting with him again! He had brought money to pay the J—–‘s. How surprised he was to find their large debt more than half liquidated. How gently did he chide me for depriving myself and the children of the little comforts he had designed for us, in order to make this sacrifice. But never was self-denial more fully rewarded; I felt happy in having contributed in the least to pay a just debt to kind and worthy people. You must become poor yourself before you can fully appreciate the good qualities of the poor — before you can sympathise with them, and fully recognize them as your brethren in the flesh. Their benevolence to each other, exercised amidst want and privation, as far surpasses the munificence of the rich towards them, as the exalted philanthropy of Christ and his disciples does the Christianity of the present day.  The rich man gives from his abundance, the poor man shares with a distressed comrade his all.

One response to “The Strickland sisters told it like it was”