The problem of age

Leave a comment Posted by Bob Goodnough on September 29, 2018 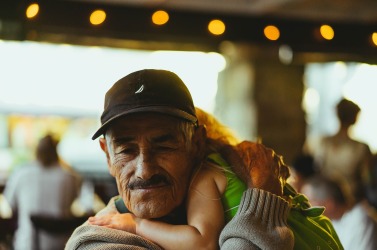 I was sitting in the food court with my 95-year-old mother. A young oriental lady rushed up to us, on the verge of tears, and wanted to meet and hold the hand of this old lady. I was startled at first, but as the young lady talked it warmed my heart to see her love for old people. She was from Calgary, in Saskatoon for a Youth for Christ rally. She had a grandmother, but she lived far away in China. Mom was in the middle stages of dementia and didn’t fully grasp what was going on. That didn’t matter to this young lady, she just felt drawn to my elderly mother.

The Bible says: “Thou shalt rise up before the hoary head, and honour the face of the old man, and fear thy God: I am the LORD” (Leviticus 19:32); and “The hoary head is a crown of glory, if it be found in the way of righteousness” (Proverbs 16:31).

Something happened when one room schools were closed and children began to be segregated by age in large classrooms. As parents accepted the idea that this was good for children, our whole society began to organize itself in age specific groups.

Parents began to believe that children learned best how to behave from their peers, rather than their parents. This was not a conclusion that they came to based on evidence. It was propagated by psychologists and sociologists. If we dare to look at the evidence, indications are that this has not been a good thing, for children, for families, for society as a whole.

The next development was the creation of youth. Neither was this an accidental development, it was the result of psychologists and sociologists downplaying the experience and wisdom of parents and discouraging children from respecting those older than themselves, or from even wanting to grow up.

Mandatory retirement was meant to make room in the work force for younger people. People were encouraged to look forward to the day when they could leave behind the drudgery of work and spend their time and energy on travel and recreation. That is, pretend you are still young and try to do all the things now that you didn’t get to do when you really were young. But life can’t be fun and games all the time, and many retirees find themselves once again pigeonholed by their age. They no longer have much in common with their workplace friends, since they are now out of touch with the things they once had in common.

Finally then, we are left with the problem of what to do with old people when they no longer appear to have anything useful to contribute to society. Too often we warehouse them in seniors’ homes.

With all the good intentions in the world, I wonder if we haven’t created places that are breeding grounds for dementia. There are many causes for dementia, of course, but when we see people who remain active and alert well into old age, most often they are people who have maintained interest in other people, especially people who are not just like them. Frequent interaction with younger people and people whose trajectory in life has been different stimulates the mind and keeps it from settling into a rut.

Interaction between old people and children can be stimulating for both. And I’m not just talking about grandparents being babysitters, although most appreciate those opportunities. Elders should be encouraged to talk about their lives, the good times and the bad, to make it real to the younger generation.

Elders should have advice to give, but not in a scolding way, or in a hopelessly idealistic way. By the time we have reached the three score and ten mark we have made an awful lot of mistakes, and hopefully learned something from them. We may not want to talk about all of them. But if we can reach back in our memories and tell where we have made a bad choice and the consequences we have experienced, the lesson we try to teach will have a much greater chance of sticking in the minds of the young.